Just last week we were praising George Maple and anticipating her first release since signing to Sydney-based label, Future Classic. Today, she has dropped her newest, and third-ever, single, Talk Talk and it’s everything we were expecting from the London-based Aussie. Smokey vocals and a thumping beat combined with superior production make this an infectious track that will be pulsating through the airwaves in due time.

Talk Talk is the first official single off Maple’s upcoming EP, Vacant Space, due to be released on 3 October.

Jessie Ware‘s sophomore album, Tough Love, is a month away but today we get to hear the first offering from it, Want Your Love. Penned with her friend and all-round musical super-genius, Dev Hynes, Want Your Feeling is the most upbeat track we’ve heard from the album yet. It’s a sophisticated dance track that downplays the bass in order to remain in line with Ware’s aesthetic. Following singles, Tough Love and Say You Love Me, Want Your Feeling is a welcome tempo change and we’re also never opposed to a Hynes production when it comes to pop music. For all those people pining over Ms. Ware, you can give up hope as she got hitched last week and is Ms no longer. 🙁 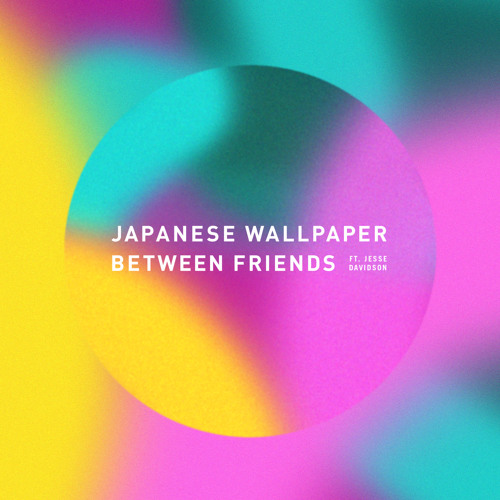 Last month, 17 year-old Gab Strum better known as Japanese Wallpaper took out Triple J’s Unearthed High and he’s carrying on with the momentum of that releasing a new tune, Between Friends. The sprawling, starry-eyed track features the vocals of Adelaide singer, Jesse Davidson who’s been releasing some stellar tunes of his own recently. Together the pair prove that age is just a number. Between Friends is a mature, well-constructed track that’s emotionally connected as well as intricately produced. Just like Breathe In, this one has some serious potential to further catapult Japanese Wallpaper onto people’s radar.

Read here why Japanese Wallpaper is one of the next homegrown artists to make it overseas. Sunday Smorgasbord is an interns curated playlist of new RnB and electronica built for hangovers, house-hangs and roasts. We loved LANY so bad back when they first premiered ILYSB (I love you so bad) and BRB and now we’re falling in love all over again with Ferdinand Weber‘s funked-up remix. Taking it from bedroom to dancefloor, Weber’s sunny version is the perfect tune to take you into the weekend. Playlist: 10 Songs You Need To Hear This Week 29 August Shine, shine, shine. It’s Friday once again and the week has delivered us an awfully large bucket of audible material. With Spring in the air and the drinks in full flow, nobody has time to trawl through new music. Luckily, we get a serious case of hayfever in the Springtime and are better off inside with the headphones on. We’re trading pollen for beats and serving up the best music this week had to offer.

10 Songs You Need To Hear This Week 29 August

Shine, shine, shine. It’s Friday once again and the week has delivered us an awfully large bucket of audible material. With Spring in the air and the drinks in full flow, nobody has time to trawl through new music. Luckily, we get a serious case of hayfever in the Springtime and are better off inside with the headphones on. We’re trading pollen for beats and serving up the best music this week had to offer.

It’s slightly arrogant to think that you could make this track any better, but UK producer, Star Slinger may just have done it. He’s turned this Tuesday testament into a house-driven delight, that takes cues from the hip-hop dance crossover of Vic Mensa’s Down On My Luck. With delectable keys and a relentless beat, this remix may be even more likely to make the club go up on a Tuesday.

It’s been more than a year since Daft Punk’s Random Access Memories, but it hasn’t been forgotten. Swedish duo Say Lou Lou have kept the Daft Punk flame alive, covering Julian Casablanca’s featuring, Instant Crush. Melodically they keep things the same, but they add revelling stings of guitar and a hazy atmosphere, that compliments their ghostly harmonies. It’s all a little bit gloomy, but life’s a little like that sometimes, ain’t it?

SOHN has been busy lately. Releasing his album, Tremors, earlier in the year, in conjunction with producing with both Banks and Kwabs,  the British dance producer has now released the atmospheric The Chase. His emotive vocals shivering through bubbling synths and intriguing glitches, this track may be just a ‘demo’ but it’s certainly at a standard to be featured on an album.

Lowell’s Bells cemented this Canadian songstress as one of the most exciting female-voices right now and she’s continued the streak of brilliance with LGBT. The title suggests that LGBT is an anthem like Lady Gaga’s Born This Way, but it doesn’t go that far. Instead it seems to be a subtle cultural comment on not holding prejudice. During she sings, “Some young people are smarter than their teachers”, over a stomping beat and dazzling synths. It’s the perfect way to let people know that Gen Y is on top right now. She’s got an album coming out soon called We Loved Her Dearly and we’re probably going to love it dearly too, to be honest.

It’s as if this song was born in hipster heaven. American producer, Emile Haynie has brought together Dev Hynes, Sampha and Charlotte Gainsbourg together to collectively deliver an odd yet affecting song. At times it sounds operatic, other times whimsical, while Sampha also takes it to church on his verse. It will take a few listens to figure out what the hell is going on but once you get your head around it, it reveals itself as a stunning prelude to the resolution of a film.

This is one for those choosing to stay in this weekend. The chill-pop tune oscillates between quivering percussion, dreamy synths, plucky strings and romantic vocals, creating a kaleidoscope of colours and textures.

First she dropped Vulnerable and everyone sat up, then she unveiled 2 On and everyone got real low and now with Pretend she’s proven she’s a bonafide RnB star. With Tinashe, there are no bells and whistles. She relies on a heartfelt melody with moody beats and a subtle climax which in this case comes in the way of A$AP Rocky’s brilliant verse. Instead of turning it up a notch for the chorus, she mellows it out, stripping the track of its beat and slowing her syllables. It’s a choice move that makes the track sound completely effortless. Ain’t no need to pretend, Tinashe is the real deal.

We’ve had this sugary sweet pop tune on repeat all week with no symptoms of a sugar headache just yet. Dropped around the same time that Aqua announced an Australian reunion tour, it’s looking like nostalgia and Nintendo on the horizon, and we’re totally okay with that. Get your dollar coins out: it’s Dance Dance Revolution time.

Sydney-based beatsmith, Basenji has delivered his first release since signing with Future Classic earlier in the year. Infused with Oriental-inspired percussion and an bassline, Heirloom takes you down the Rainbow Road and will have you instantly addicted. It’s free to download via the Future Classic Soundcloud page.

Debuting his single, Hunger, today on BBC Radio 1 with Zane Lowe, singer-songwriter Sam Sure immediately had us wanting more.  Understated synths and a steady beat allow Sure’s ethereal voice to shine through on the electronic-come-R&B track. With precise production and perfectly-combined layers, it is a shining debut from the UK artist. Hunger is out on October 13th via iTunes. There’s certainly somebody talking, and that’s the fans of The Preatures who woke up this morning to an official release date for their album as well as a new single from said album. After Two Tone Melody soothed our ears and calmed our souls a few months back, Somebody’s Talking is one to get you up and moving again with a bouncy tempo shining through the Sydney outfit’s signature ’80s-inspired pop rock sound. Driven by a groovy guitar riff, it is the closest thing to Is This How You Feel yet.

Blue Planet Eyes is out on September 26 in Australia. After running up that hill for an arduous 35 years, Kate Bush has finally made it back to the stage, once again gracing London’s Hammersmith Apollo with her presence. The first of 22 sold out shows, it was said to be “a triumphant, hit-filled and characteristically theatrical return to the stage.” In honour of the short-but-sweet return of the 56-year-old British singer, London electric duo, Avec Sans have covered one of her more well-known tracks, Running Up That Hill. With no plans for new material nor a plan to arrive on Australian shores, this electro-inspired remix is the next best thing to experiencing the eclectic singer in the modern day. Grimes (aka Claire Boucher) made waves when she first released Go, a song originally intended for Rihanna, in June. Already amassing over 1.5 million plays on SoundCloud, the strobing, left-field pop track was the first track from the singer in two years. Boucher has now released the music video; a visual smorgasbord of post-apocalyptic imagery featuring some serious dance moves by the singer.

The video was co-directed by Boucher herself, alongside her brother, Mac. She describes the concept below:

“In the inferno, people’s actions in life echo eternally. Mike (Virgil) and I (Dante) wander through the circles of hell. It’s not a traditional hell, it kind of reflects stuff that’s going on today. We shot a bunch at the Salton Sea, which is basically an apocalyptic wasteland filled with dead fish because of human carelessness, [and in] a hallway of bullet holes a la Korn “Freak On a Leash,” etc. If you look closely you can find clues. But in the usual fashion it is also abstract enough to just be a trippy visual accompaniment to the song.”